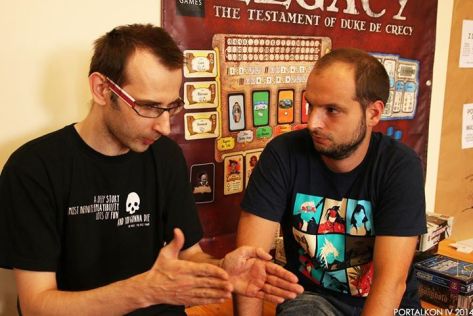 I was asked once if there is any sense for me to go to small conventions. Ignacy you go to Essen, Gen con, BGG con, Lucca, you visit all those big shows, you meet thousands of players, sign boxes and promote your games. Why the hell are you still going to small cons. It doesn’t make sense anymore. Focus on big cons, man.

This weekend I spent in Lublin at Boardmania con. Smallest convention ever. There was like 30 people there. It was basically board games hangout. Makes no sense to go there, huh?

Well, actually it makes a lot of sense to me.

Big cons are big. I meet so many gamers, so many fans, but I have like only 2 or 3 minutes to chat with them, just few sentences and that’s it, new people come and want ask me question, sign game or take a photo. It’s always rush, it’s always in hurry, it’s shaking hands with hundreds of people per day.

Totally different story is a small con. I can sit with few guys for an hour drinking tea and talking about games. I can run demo of my game and tell jokes and stories at the same time because we are not in a hurry – we have two hours to enjoy the moment. I can meet and get to know people. You guys can meet me and get to know me better.

That is why I go to small conventions as often as I go to big conventions. I believe our hobby is all about people. Games are social experience. Games are about hanging out with people. Convention where I can spend a weekend with 50 gamers and hang out with them is a great choice.

My advice for you? Go, meet people.

Here is a couple of cool tweets that made me smile this past week. I hope you’ll enjoy them too!

Then we put together weird ships in Rattle, Battle from @trzewik. pic.twitter.com/cZDiWyb6p5

It’s GDJ about his designs. Find them on KS here!

To appreciate the following stories, you’ll need to know a bit about the mechanics of the game, Smoke and Mirrors. There are three suits, each of which has a different distribution of cards. Each player gets one card from each suit as their hand.

In playtesting, most players pick up the pattern after a round or two. Stars are (usually) 1, Skulls are (usually) 5, and each Spiral card is unique. So, if you’ve got the Spiral 3, and someone puts down a single Spiral card claiming a total of 3, you know they are lying.
Mirrors, by the way, copy one or two of the other (non-mirror) cards it’s played with.

MAGIC PLAYTESTING MOMENT #1: Manny’s Impossible Bluff
In an early version of the game, everyone (not just the next player) had the option of calling your bluff. Manny claimed a total of 4, and put down a single Skull card.
Consulting the chart above, you’ll see that no Skull card has a value of 4, so he was clearly lying. Watching the game silently, I expected the next player would call him out, and that would be the end of it.
However, the next player was too preoccupied with figuring out his turn to notice Manny’s mistake, and he played without challenging. The following player likewise didn’t challenge Manny. There was only one player left before it would be Manny’s turn again: Gabriel.
Gabriel has noticed Manny’s misplay. He knew that it was impossible. And yet… he had just seen two other players decline to call him on it. Gabriel paused, took a deep breath, and accused Manny of lying.
After the game, I asked Manny why he had played a Skull, when he knew that it was impossible. He admitted to simply grabbing the wrong card from his hand! He was as surprised as anyone to see his Skull card (instead of his Spiral card) on the table, but felt that it would arouse too much suspicion to pick it back up. His audacity almost paid off.

MAGIC PLAYTESTING MOMENT #2: Loser’s Revenge
Weeks later, Jim and Brian were losing badly to Gabriel (who had won five rounds in a row). Jim puts down a Spiral card and claims “2”. Brian doesn’t call Jim.
Brian puts down a Star and Spiral card and claims “3”. Gabriel looks at Brian and says, “The only way to form a total of 3 with those cards is if the Spiral card had a value of 2. But, if you were holding the Spiral 2, you would have called Jim when he claimed to have the Spiral 2. You’re obviously lying.”
But Brian was telling the truth! Even though he knew Jim was lying about having the Spiral 2, he didn’t call Jim in order to set a trap for Gabriel.

DIGRESSION ON GROUP-THINK
On the one hand, Smoke and Mirrors is open to analysis. There are 216 possible hands, but that includes a lot of duplication. There are only 24 unique hands. You have a great chance (93%) of being able to produce a 5, and not a very good chance (33%) of producing a 3. But this doesn’t matter.
Your group might arrive at the (mathematically justified) conclusion: “Never claim a 3, unless you have it” is a good heuristic for the game. You all smile and nod and agree, yes, 33% is far too unlikely, you should never bluff a 3. Then you deal out the cards and, suddenly, the player before you claims to have a 3. Is she lying?
The mathematical analysis, the theory, the discussion, the sensible agreement all go out the window. Certainly, she knows that bluffing a 3 is always a bad play, so she’s not bluffing. But, maybe she’s counting on you using this logic to get away with bluffing. She’s won the last two rounds, so she wouldn’t risk throwing it all away on such a transparent bluff, would she?

MAGIC PLAYTESTING MOMENT #3: Pride goeth before the fall
The dialogue in this story speaks for itself.
Manny: (calling Jim’s bluff) “You’re lying. You know how I know?”
Jim: (revealing his winning hand) “You don’t know.”

Smoke and Mirrors is one of three new games in the ButtonShy wallet series. All three are on Kickstarter right now!

You probably noticed I was super stressed before Gen con. I was terrified, I had huge pressure on me and it was really hard to cope with that. I felt tired all the time, couldn’t focus at work, my only dream was ‘Let this Gen con be over.’ Yeah, there was a lot of stress. Or to be more precise – I put all this crazy pressure by myself. Anyway, this was horrible few weeks.

All games arrived (although we had many adventures with that), games were selling like crazy and games got very good feedback. On my FB and Twitter feed I see more and more pictures of people playing and enjoying Rattle, Battle. That’s my first family game, I was really afraid about the feedback.

I am no longer afraid.

This weekend I saw many tweets with people playing my games. Here is one of them. Father and daughter playing Rattle, Battle. How cool is that!

@trzewik ok… So my 6 year old daughter just said, “why don’t you just board him?”she’s much smarter than me!

Operation Gen con is over. I am happy again. I am energized again. I am motivated like crazy again. I work every day since the very morning till the very late night again. I am back in action. I have so much energy as never before. I think I may explode at some point.

Let’s face it. I missed me. I missed this obsessed with work dude who can not wait for the next day and for these all crazy things he will do next day.

Welcome back Ignacy. Good to see you again.