Many of you know this story – there is a group of 4 players who wants to play Robinson. I sit with them, I explain goal of the scenario and I point my finger at round 7th depicted on scenario sheet. ‘You are gonna die here. Round 7.‘

Last week I was in Coy, Spain with a group of great people who works in education as trainers, teachers, event and activity organizers. I was teaching them about modern board games.  One day they asked me to present them Robinson. I told them what’s the goal of the scenario, I pointed my finger on 7th round and I told them they will die here.

They played. They survived till round 8th. It was an epic struggle.

Few hours later, in the evening they asked me if they can play rematch. They wanted to play again. So they played. Long, epic struggle that ended 1 A.M. Round 10th. They died. I thank them and went to bed.

Next day they approached me again. ‘We stayed at the board for half an hour that night trying to find mistakes in our strategy. We also had today in the morning meeting.’  they said – ‘We were planning our strategy. We want to play again. We will win.’

We set up Robinson again and they played again.

In the 11th round they were like John McClane at the final 10 minutes of any Die Hard movie. Covered in blood from head to toe, they were hardly breathing. The Island treated them with no mercy. It was 11th round and the wood pile was far from being ready. I used all me experience in the game, calculated every option I could see and I said: ‘As far as I see… theoretically you can still make it. You need a miracle, but you still can win against this f… Island.‘

And you know what? They did it. They won. Their third game in a row finally ended with a success. Merry recorded this moment when they survived event phase in round 12th and put wood on the pile.

They were so damn proud and happy.

And believe it or not, I was 10 times more proud and happy. Just in front of me passion, emotions, pure joy and happiness were happening because of Robinson Crusoe. It was amazing feeling. Me in heaven. Again. Thank you.

This week in his Ivory Tower segment of Board games Breakfast Scott Nicolson was telling us about reflection after the game. Gaming experience is something we do love, but to make it even better we perhaps should try to talk about the game after the game, discuss our strategies, point of view, discover why opponents played that or that way. After game reflection.

There are two main after game types of reflection about Robinson. The game is super narrative and thematic and playing it was a true adventure. I observed that players like to retell the most thematic moments of the game they’ve just finished. And the second one type of reflection. The game is super deadly. Players tend to discuss if they had any chance to survive and if there was a turning point, a bad decision that head them towards the final end.

And at some point Tim Norris wrote that:

Train of thoughts head me towards session reports which are some sort of after game reflection and… you know, in Robinson if you want to write session report it’s simple – either this will be epic novel, either it will be concise as the inscription on the tombstone.

So I asked my Twitter followers about shortest Robinson session report they can imagine. 144 characters seemed like a perfect format for this task.

The answers? Made me laugh. That was a flow of super fun reflections about Robinson! Look at them:

@trzewik Ready to play. Ooh we are in trouble. Dammit we lost.

@trzewik We’re doing ok. We can still do this. Let’s try again.

And my personal winner of this series of reports:

The last one made me LOL.

I show you this fun example of reflection about the game, but being serious for a moment I have to say, I 100% agree with Scott. I do love gaming experience, I do love play games, but without reflection, without these debates, after game bantering, without all that’s after the game, it wouldn’t be the same.

Last day of vacation & I (jim) got in a game of Robinson w/ my mom, daughter & aunts. My Aunt controlled dog & Fri. pic.twitter.com/CLbEFXSRWX

And since – without having doubts – this is an amazing game you are eager to see reviews, opinions. You want to imbibe feedback that’s coming. Oh, yes. Gamers will praise you, will say nice things, will congratulate you… Yeah…

Here is what you can do now:

Either you gonna end up being stuck in front of monitor for the next half of the year searching for all reviews, comments, discussions.

Either you sit on your ass and start to work on new project.

Woody Allen doesn’t give a shit about reviews. When it’s done, he just walks away.

I’m not Woody Allen. I’m high. Handsome. And I can’t walk away.

So here is my advice. Stop talkin’ about Robinson or I won’t do new game.

Hello! People! I can’t focus on my new project!

I am not that good with bragging. I mean, I try to talk about my successes and achievements, but I am always afraid of this small line between sharing happiness of achieving some success and between bragging. Talk to much about your self and you no longer act like happy person. You act like jerk.

So here I am. Thin line. Not bragging. Just sharing my pride and happiness…

Space-Biff put Robinson as #1 choice at Best 2013 Alone / Co-op. All other great games you will find here.

Space-Biff put my other game – Convoy – as #7 choice at Best 2013 Head-to-heads. Great games for2 players you will find here.

In the meantime ZMan published their second print of the game and Robinson jumped to #23 rank at BGG. In my most cocky dreams I would not predict this. Thank you for all your votes! Thank you so much!

I know this game is hard to get. If you have chance to play it – have a try. This is really a fine game. 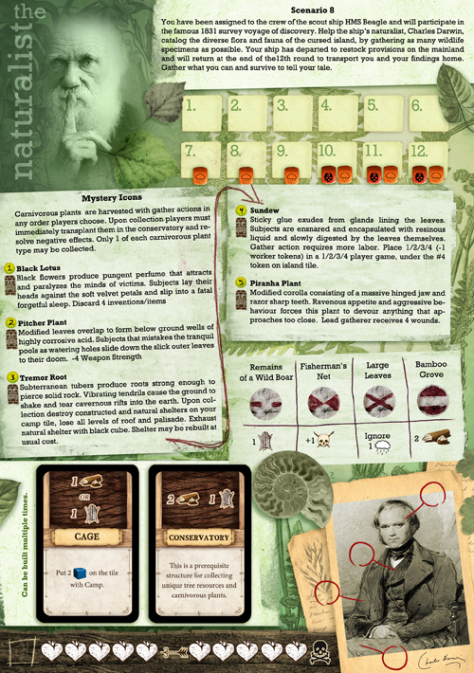 I have never had a boomerang but I always believed it is kind a cool stuff. You throw it and sooner or later it comes back. Well, at least that’s what I saw when I was a kid and watched cartoons. Anyone here tried it in real life?

This week something ‘boomerang style’ happened.

In 2012 I published Robinson. I spent countless hours designing the game and finally it got released. Thrown into the world. I got feedback very quickly, first ratings on BGG, first reviews, emails from players and meeting them on convention. That was awesome. Every hour, every night, every weekend spent on Robinson did pay off. Every time I receive geekmail from Robinson’s player, every time I meet players at convention I feel that it was damn worth it.

You know all of that. I write about this on my blog all the time.

This week however something extraordinary happened. New scenario for Robinson was published. Scenario designed by game’s fans. This was like a hit. That was exactly boomerang thing. I released the game and now it comes back with new content. Amazing content, to be precise.

I may be one of the best writers among boardgamers but this time it is hard to fully express my feelings about that unique experience. Reading great content created by fans for my game. Priceless, as Mastercard marketing would say.

This very first time I will just shut my mouth up and I will do something else. I will act. Here is my idea.

Please, join me this day and play Robinson. Take your copy from shelf and play The Naturalist scenario. Let’s play it worldwide, as many of you as possible. I will be on twitter for whole day (@trzewik) and I will report how many points I managed to get. Look for #naturalist hashtag.

Let us all say: ‘Good work, thanks!’ to the team who developed The Naturalist scenario. This is amazing gift I was given.

Here is a link to STORYonBOARD magazine where Robert and Marion published awesome article about creating this scenario. You have to ready this story! http://files.neuroshima.org/sob_008.pdf